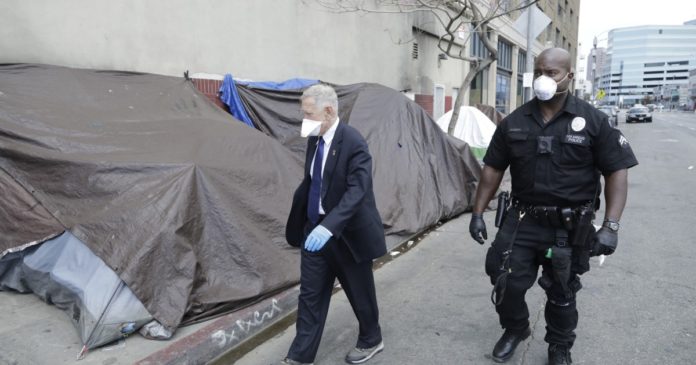 A federal judge overseeing a sprawling lawsuit about homelessness in Los Angeles ordered the city and county on Tuesday to offer some form of shelter to the entire homeless population of skid row by October.

Judge David O. Carter granted a preliminary injunction sought by the plaintiffs in the case last week and now is telling the city and county that they must find single women and unaccompanied children on skid row a place to stay within 90 days, followed by helping families within 120 days and finally, by Oct. 18, offering every homeless person on skid row housing or shelter.

“Los Angeles has lost its parks, beaches, schools, sidewalks, and highway systems due to the inaction of city and county officials who have left our homeless citizens with no other place to turn,” Carter wrote in a 110-page brief laced with quotes from Abraham Lincoln and an extensive history of how skid row was first created.

Carter also wrote that “after adequate shelter is offered,” he would allow the city to enforce laws that keep streets and sidewalks clear of tents so long as they’re consistent with previous legal rulings that have limited the enforcement of such rules.

He also ordered the county to offer “support services to all homeless residents who accept the offer of housing” including placements in “appropriate emergency, interim, or permanent housing and treatment services,” through the county’s Department of Mental Health and Department of Public Health. The costs for this work would be split by the city and county, he said.

Rob Wilcox, a spokesman for the city attorney’s office, said Tuesday that city lawyers are reviewing the order. He declined to comment further.

Skip Miller, partner at the Miller Barondess law firm, which is outside counsel for the county in the lawsuit, said the county is “now evaluating our options, including the possibility of an appeal.”

Previously, the county had asked to be removed from the case, arguing that it was about the city and that the county was aggressively responding to homelessness without any direction from the court. It cited efforts that included spending hundreds of millions of dollars annually through the Measure H sales tax and developing innovative strategies such as Project Roomkey in response to the COVID-19 pandemic. Project Roomkey is a state program that provides temporary funding for cities and counties to rent hotel rooms for homeless people during the pandemic.

This injunction “is an attempt by property owners and businesses to rid their neighborhood of homeless people,” Miller said.

“There is no legal basis for an injunction because the county is spending hundreds of millions of dollars a year on proven strategies that have produced measurable results throughout the region, not just on skid row,” he added.

Matthew Umhofer, an attorney representing the plaintiffs in the case, said he and his clients were ecstatic by Carter’s call for action. This was what they had been looking for when they filed the case in March 2020, he said, and why they sought out Carter, who had overseen similar cases in Orange County in recent years, to preside over it.

Carter’s order comes the day Mayor Eric Garcetti released his budget for the next fiscal year, which includes nearly $1 billion in spending on homelessness. The longtime federal judge also ordered “that $1 billion, as represented by Mayor Garcetti, will be placed in escrow forthwith, with funding streams accounted for and reported to the court within seven days.”

Of the $1 billion in homeless spending planned by Garcetti, more than a third would come from Proposition HHH, the 2016 bond measure to build permanent housing for homeless residents. Garcetti aides said they expect the city will be building or developing 89 HHH projects over the next fiscal year, for a total of 5,651 units. Whether Carter’s order will disrupt those activities is unclear. In his order, the judge said he wants a report in 90 days of every developer receiving funds from HHH, as well as new regulations to “limit the possibility of funds being wasted.”

Many of these projects have been delayed and this was the year Garcetti aides expected progress to pick up. Last year more than 1,300 homeless people died in Los Angeles County, and Carter said that the city and county had “decided to focus on housing at the expense of shelter, even knowing that massive development delays were likely while people died in the streets.”

Carter has also asked for a number of reports from city and county officials about how money for combating homelessness has been and is currently being spent. He wants these reports within 90 days and has ordered a “cessation of sales, transfers by lease or covenant, of the over 14,000 city properties pending the report by the Controller Ron Galperin to the court, and all similarly situated properties held by the county pending the report by the county counsel.”

Councilman Mark Ridley-Thomas said that city officials are still trying to understand the implications of the court order, including how it would affect existing plans to spend hundreds of millions of dollars on homeless housing.

“There’s a lot of questions that we are seeking to sort through,” Ridley-Thomas said Tuesday after the decision was released. “Any time the court shows up, there is justifiable fear and trembling.” What is clear, he said, is that the court decision stems from the failures of the city and county to seriously address the crisis. “There’s no way to deny that,” he said.

In his order, Carter outlined historic forms of discrimination that had cut Black people out of housing opportunities, including redlining, segregated systems of assistance during the Great Depression, highway construction that displaced Black families, and criminalization that disproportionately affected Black communities.

Racial inequity has continued to color government handling of the crisis, Carter added. For instance, a report presented to county leaders found that Project Roomkey, a program to rent hotel rooms for homeless people, had been disproportionately provided to white people, “exacerbating the risks to a Black population that already disproportionately bears the harmful effects of the city and county’s failure to address homelessness,” Carter wrote.

Carter concluded that current city and county policies “compound and perpetuate structural racism, threatening the integrity of Black families in Los Angeles and forcing a disproportionate number of Black families to go unhoused.”

This is a developing story and will be updated.

The GOP-Big Business Divorce Goes Deeper Than You Think

‘We Always Rise.’ A Black-Owned Bookstore in Newark Navigates the Pandemic

What Apple’s iOS 15 means for marketers

Tom Barrack charged with acting as an agent of a foreign...

Trading the Welsh Countryside for a Ranch in Wyoming

Companies Like Instacart and Home Depot Are in a War for...

A Gift That Keeps on Giving

ABOUT US
Usnewszone your news, entertainment, music & fashion website. We provide you with the latest news and videos straight from the entertainment industry.
Contact us: contact@24worldmedia.com
© Copyright 2020 | 24WorldMedia All Rights Reserved